A few weeks ago, Bounder Games went on the road south for the Norwich Gaming Festival. This is a smaller industry event which has quite a variety of content, including indie games such as ours, talks, a VR showcase, a physical and vintage games tent, and even a laser tag course for the kiddos (both small and large). I was really impressed by all the different content at the show, from a consumer perspective. As a dev, I loved the laid back feel of the show and the opportunity to get to know other developers and try out some really interesting and innovative games. It was also great to get feedback on Armoured Engines both from the public and from other devs. 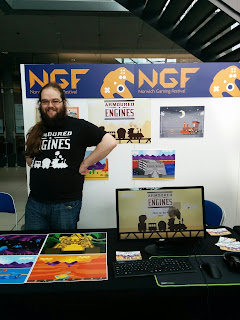 We brought a demo very similar to the one we showed at EGX Rezzed in April. On the surface, we’d made some tweaks to the tutorials based on the feedback we received. Underneath, it was a vastly changed game – I had revamped the entire data storage system and also implemented asset bundles, a huge undertaking that introduced loads of bugs. Thankfully we caught many (though not all!) of them before the show. 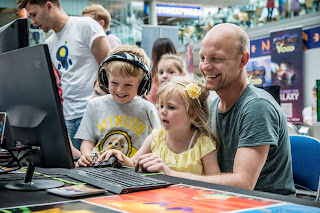 One of the main reasons for showing at Norwich was audience feedback. Unfortunately, we mainly learned that our tutorial pain points are still problems. People still have trouble dragging coal to our boxcar, they still have trouble noticing the button in the upper left even though it has a massive star under it, and there are a few other problems kicking around in the level. We have ideas to fix these issues – we’ll have to see at the next conference if they pay off. 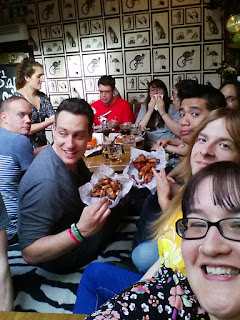 We also got to meet some amazing indie devs! I won’t try to mention them all by name here, but we had an amazing weekend and had a blast talking shop with awesome people. This was my favorite part of the show – getting to play other indie games and chat with the devs. To our booth mates and everyone else we talked to – thanks for a wonderful experience!

Overall, this was an awesome experience and I really want to return next year. While the festival was free to show at, the travel costs were high to get all the way down to Norwich – however, I feel like the experience and contacts we made were totally worth it. Besides, we had a blast, so it was almost like a holiday. Til next year, Norwich!

A Weekend in Norwich